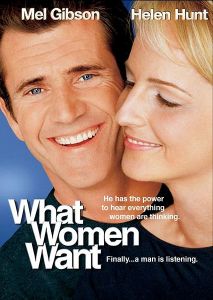 With some women you almost have to be a mind reader!

The other night we went out for Mexican food and margaritas, and then had a little kickback. Of course, when you have a bunch of young men and women who are slightly tipsy and talking after midnight, the conversation turned to sex and dating. Nothing too racy but still my mind was blown. I’m a bit of a. . . traditionalist*, so there was a lot of pearl-clutching on my end. What was really interesting to me was the differing attitudes toward communication. There was an interesting resistance on the part of the ladies (other than me) to straightforwardly asking for what you want, in or out of the bedroom. “I don’t like directing,” said one. “I like to do things that make the guy think this is what he wanted to do, and it was his idea,” said the other. Really though? As Tex pointed it out, it’s not an ineffective or totally unreasonable way to go about living your life. It does get results. But it just seems so silly and stupid to me! How is it work to ask for you want? I do that as naturally as breathing. Maybe it’s just because I’m a youngest child, but I took all those cliche’s about closed mouths and squeaky wheels to heart. Once I heard Matthew 7:7 it was a done deal. I was going to ask, seek and knock like it was my business!

Basically, I’m simple. I’m not very good at dissembling, plus I’m impatient so candor is just more efficient! And to me, it just comes off as condescending, bordering on disrespectful, to try to direct someone’s actions without them realizing it. Nothing is more attractive to me than a man who knows his own mind. My goal was always to find a man who wanted the same things I did, so that eventually I wouldn’t need to always ask him for things. It would start to happen naturally through our reciprocal affection and desire to please one another. To put it metaphorically, I’m an open book. I practically come with an instruction manual! If you don’t bother to read it, it wasn’t meant to be. But I certainly don’t expect you to be able to read it in braille, or write it without being able to ask me any questions.

I don’t want to come off as a smug wife who thinks she knows what’s best for the poor single ladies by virtue of the ring on her finger. However, I’ve always had a strong sense that no matter what your other preferences, open and honest communications are a necessary piece of a successful relationship. And again, isn’t it just easier? Maybe I’m being naive, I haven’t dated actively for 5 years so who knows. What do you think?

*Some would call me a prude, but I disagree. I have a healthy relationship with my own sexuality, I just don’t particularly care to see or hear about anyone else’s

This work is licensed under a Creative Commons Attribution-NonCommercial-NoDerivs 3.0 Unported License.

Shop more of my closet on Poshmark